The European Integration Monitoring Initiative Bosnia and Herzegovina is an nonformal coalition of thirty civil society organizations that contributes to monitoring the reforms and monitors the application of the policies, rights and standards of European Union, focusing on issues of democracy, the rule of law and human and minority rights.

The EU Integration Monitoring Initiative in BiH has been recognized as an important third factor in the BiH EU integration process and has an active role in creating policies and requirements that contribute to the democratic process and the rule of law.

The initiative was set up in early 2013 with the aim of monitoring the European integration process in a transparent, professional and non-party way. Civil society organizations involved in the Initiative work, share values ​​based on human rights, governmental rights, equality and democracy postulates. The mission on which they base their activities in different political and legal areas is the organization of society on equal grounds.
The work of the Initiative is based on the following principles:

Anti-discrimination – Within the scope of the Initiative and its members, any form of discrimination based on age, race, color, language, religion, ethnicity, national or social order, national minorities, political or other beliefs, property status, trade union or other association, education, social status and gender, sexual expression, gender identity or sexual orientation and / or any other difference is forbidden, in accordance with the Law on Prohibition of Discrimination in BiH;

Equality – We promote equality and condemn all forms of nationalism, in particular discrimination, hate crimes and hate speech based on religious, ethnic and national affiliations. We promote freedom of (non) identification based on religious, ethnic and national affiliation;
Independence and impartiality – full-fledged and associate members, as well as all other bodies and individuals that are part of the Initiative in their work and address are independent in their work and have the obligation to express an impartial attitude and strive for the values ​​defined in the platform;
Members and officials are required to present their reports, submissions, articles and other written documents as well as oral addressing in the spirit of public accountability and monitoring of the work of representatives of the authorities, political parties and other participants responsible for running the process of companies;
Area of ​​action:

Monitoring, Documenting and Reporting;
Research (system approach to different issues, review and monitoring of the work of institutions, research in the area of ​​structures and processes, preparation and promotion of reports on the state of BiH’s progress in EU integration);
Building member capacity (gathering and receiving membership of civil society organizations, as well as other interested individuals working to promote rule of law, building a democratic society and advocating human rights);
Advocacy (policy, reform of the political / legal system, right to equal access to justice for all citizens);
Promote the work of the Initiative, ie its members, through the web portal, social networks, media;
Education (researchers, government representatives, civil society organizations, the general public). 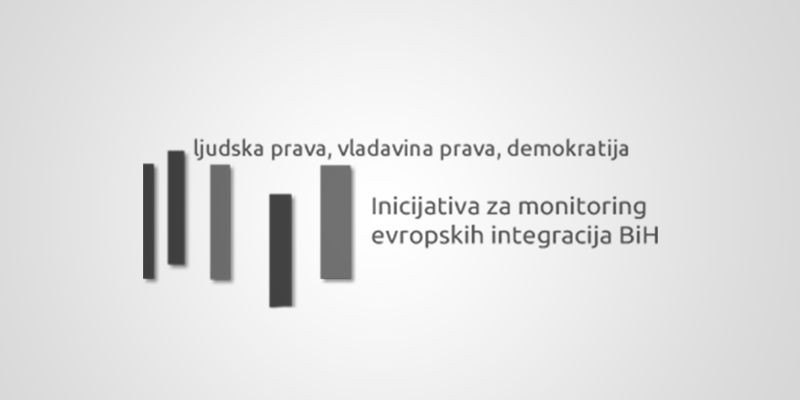