The tenth edition of the POINT Conference will be held on the 2nd and 3rd of June in Dom mladih Sarajevo (the Youth House), and it will gather about 70 speakers and more than 200 participants from the region of Southeast Europe, but also from all over the world. During the two days of the conference, participants will discuss a number of topics such as the importance of fact-checking, the fight against conspiracy theories, and the impact of the COVID-19 pandemic on all walks of life. Participants will also discuss the war in Ukraine, the fight against disinformation that appears daily in the media in connection with the Russian invasion but also the Arab Spring ten years later, and many other topics. 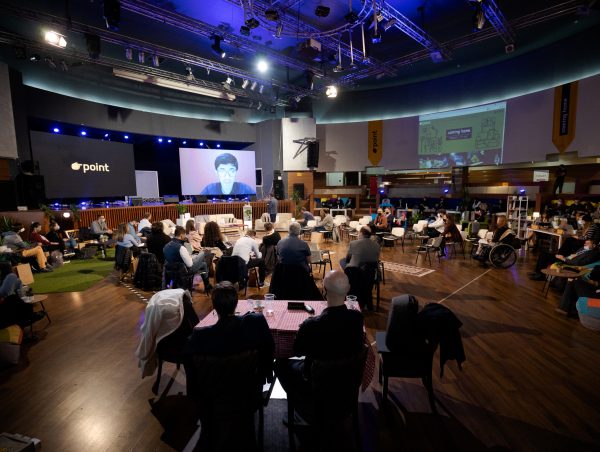 The full program of the POINT Conference is available HERE.

The first panel discussion will focus on the importance of fact-checking in the last ten years, and will be discussed by Angie Holan of the US fact-checking organization PolitiFact; Ieva Ivanauskaitė of Delphi, the largest online news organization in the Baltic states; Elida Zylbeari from the NorthMacedonian Metamorphosis Foundation; Enock Nyariki from the International Fact-Checking Network (IFCN); Milijana Rogač from the Serbian fact-checking website Istinomer. The panel will be moderated by Ana Brakus, Executive Director of the Croatian fact-checking platform Faktograf.

Factual, objective and professional reporting is always a hot and important topic. However, during extraordinary circumstances, such as wars, it is even more important to know what is actually happening on the ground. Ukraine has been in this kind of situation for eight years now. Since 2014, the Euromaidan uprising and Russian occupation of Crimea, and especially after the Russian invasion in 2022, propaganda and fake news about events in Ukraine have flooded the Russian, Ukrainian and global information ecosystem.

“Reporting on Ukraine – How to Make Sure the Truth is Heard” is a session that will focus on reporting on and from Ukraine over the past eight years. Panelists Anastasiia Stanko and Iryna Shvets from Ukraine, Una Čilić and Ajla Obradović from Bosnia and Herzegovina, Jeremy Druker from the USA currently living in the Czech Republic, together with Jakub Gornicki from Poland, will share their experiences about factual reporting on Ukraine and thoughts on journalism in this country.

How did the media and their audiences transform in the past decade? What happened with buzzwords like “citizen journalism”, and what’s the perspective of current trends like fact-checking? How does the relationship between journalism and technology impact the quality of information? Is the world really “in your pocket” if you use a smartphone, or has it become impossible to distinguish between actual information and the algorithmic noise? Has the media regulation changed along with the media environment to keep pace with this? And are the media freedoms on the decline wherever we look or do we (also) have hopeful stories to share?

If any of these topics interest you, make sure to tune in to this panel, because we’ll tackle relevant issues of today by putting them into the perspective of recent history of media development, seen through the eyes of our excellent panelists Lea Auffarth (Journalism Trust Initiative), Adeline Hulin (UNESCO), Milica Kovačević (CDT), Nejc Horvat (Today is a new day) and Vukašin Petrović (Information Access Fund). The panel is moderated by Tijana Cvjetićanin (CA “Why not”).

The past two years have demonstrated all the harm from believing disinformation and distrusting science and evidence-based medicine. The paradox is striking: the advancement of science gave us unprecedented advantages over those who came before us – we were hit with a pandemic and given life-saving immunization in less than a year – but, at the same time, we also have an unprecedented number of people who willingly refuse to reap those benefits. That didn’t happen overnight: the attack on science and reason under the guise of uncovering “real truths’” has been going on for a while, propelled by countless conspiracy theorists whose profiles and visibility grew steadily in the past decade. In this panel, we’ll discuss how this process unfolded and how we may respond to it by efficiently promoting science, improving the perception of evidence-based knowledge and hopefully impacting the tendency to accept conspiracy theories, particularly those related to health and science. Our panelists Tijana Prodanović (Department of Astronomy at the University of Belgrade), Stipe Odak (Université catholique de Louvain) and Tijana Cvjetićanin (CA “Why not”), will approach these topics from the angles of natural sciences, social theory and fact-checking. The moderator of this panel is Amar Karađuz (Raskrinkavanje/CA “Why not”).

The successes of “Možemo” in Croatia, as well as recent results of “Moramo” in Serbia, have been unexpected by many. The phenomenon of civil society joining active politics is not something exclusive for the past years, but it seems like there is this regional vibe of civil society going into politics and finally having some impact. We have seen this happen in Albania, where former civil society activists are holding high positions, and in Northern Macedonia, where a lot of influential officials have come from the civil society, and the successes of “Možemo” and “Moramo” make it feel like this phenomenon has gone mainstream. This POINT conference panel will discuss this topic and talk about its good sides, as well as potential shortfalls or threats. Speakers at this session, moderated by Darko Brkan from CA “Why not”, will be: Srđan Perić (Preokret); Edlira Gjoni (Impact Center); Maja Zimmerman (Today is a new day); Gordan Bosanac (We Can! / Zagreb is ours) and Radomir Lazović (Don’t Let Belgrade D (r) own).

Economic migration and brain drain are major problems in the SEE region, and relevant and accurate data on the number of people leaving are outdated. Another problem is that some countries in this region did not conduct a census in 2021, so there is no data on the number of people who left the country. We will discuss this topic with Jasmin Hasić from Humanity in Action, BiH; Bojan Blazhevski from Meta news agency from Northern Macedonia; Andrea Mićanović from the Center for Democracy and Human Rights; Gordana Radojević from the Association of Statisticians and Demographers – DSD from Montenegro, and the panel will be moderated by Dalio Sijah from CA “Why not” from BiH.

In December 2010, civil protests erupted in Tunisia, which would soon spread across much of the Middle East and Northern Africa in a movement that would come to be known as the Arab Spring. The world witnessed the downfall of the Mubarak regime in Egypt as well as the al-Gaddafi regime in Libya as a result of these mass demonstrations, which brought hope of substantive social and political change in much of the Arab world. Today, however, the promises of the Arab Spring have been rescinded upon or failed to materialize in many parts of the region. At this POINT conference, Egyptian activist Ahmed Samih will speak with civil society experts and human rights activists AbdulRahman Shdeifat from Jordan; Majeed Alzubaidi from Iraq; Huda Shafig, a feminist and a women’s rights activist from Sudan, and a journalist Zied Mezghanni.

During the two days of the conference, there will be a panel discussion on Digital Rights, the Evolution of Civic Tech; The business community in the digital era of disinformation, and through two sessions, we will talk about interesting projects developed during the last year in the region and beyond.

The POINT Conference is organized by UG “Zašto ne” (Citizens’ Association – CA “Why not”), in partnership with ACTION SEE and SEE Check networks. It is supported by the National Endowment of Democracy (NED); Balkan Trust for Democracy (BTD); Open government partnership (OGP), and the Center for International Private Enterprise (CIPE).