The third report on the harmonization of the judiciary in Bosnia and Herzegovina with the criteria of the European Union, made as part of the regional research “Western Balkans in the process of EU accession: Meeting the political criteria” which U.G. “Why not” in cooperation with partners in the region – the Center for Democratic Transition from Montenegro, the Center for Research, Transparency and Accountability (CRTA) from Serbia, and the Metamorphosis Foundation from Northern Macedonia, shows that reforms in this area are moving very slowly. 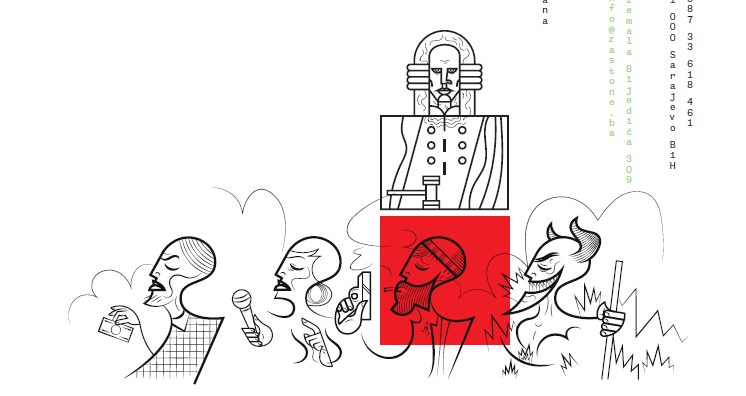 The past years in Bosnia and Herzegovina have been marked by many suspicious scandals, threats of criminal charges, and general stagnation in reform processes.

The latest report of the European Commission also shows a negative opinion, stating that the competent levels of government do not allocate sufficient financial resources for the measures listed in the Strategy, although numerous working groups are operational for their implementation.

Almost the entire year 2019 in the judiciary was marked by the “Horseshoe” affair, in which one of the main actors was the current president of the HJPC BiH, Milan Tegeltija. A criminal complaint against Tegeltija was never filed, and a disciplinary lawsuit and a request for his suspension due to inappropriate contact and taking bribes to speed up the process were rejected. Shortly afterwards, Tegeltija made headlines again. This time due to doubts about his impartiality and independence. The President of the HJPC responded and attended a meeting convened by the President of the SNSD and a member of the Presidency of BiH, Milorad Dodik, who aimed to gather RS representatives in state institutions and agree on their blockade.

On the other hand, the President of the HJPC BiH is not the only representative of the judiciary who has been monitored by various scandals. Among them was the Chief Prosecutor of the Prosecutor’s Office of BiH, Gordana Tadić, who was repeatedly accused of employing relatives, as well as relatives of her close associates.

The highest representatives of judicial institutions in BiH have also been accused of covering up the facts in certain cases before the courts, as well as protecting murderers, etc. The public was especially shaken by the cases of the murders of two guys, Dženan Memić and David Dragičević. Both cases are accompanied by a series of illogicalities, modification of criminal offenses, concealment of evidence, and, as the media report, a strong political influence on judicial institutions and individuals. The cases have not been resolved to date.

Dissatisfaction with the work of judicial bodies, as well as with the HJPC, was shown by the Parliamentary Assembly of BiH by not taking note of the reports of that body for 2017 and 2018. A letter sent to the President of the HJPC, Milan Tegeltija, from the OSCE, the US Embassy and the EU delegation confirmed that there was cause for concern.

According to the letter, the positive efforts so far in the implementation of reforms during 2018 have been overshadowed by worrying phenomena that negatively affect their further implementation, and are related to the areas of filing property records, performance appraisal, and the appointment of judges and prosecutors. International officials warn of favoritism, lengthy processes, and the questioning of the integrity and independence of the judiciary.

All of the above is confirmed by both international and domestic reports on the state of the BiH judiciary.

It should also be mentioned that the revised Strategy for the Prosecution of War Crimes Cases, the adoption of which has been awaited since 2017, has also not been adopted to date. The new Strategy should enable a greater degree of transfer of cases to the courts of the Entities and the Brcko District, so that the Prosecutor’s Office and the Court of BiH would be relieved of less complex cases and given the opportunity to complete the most complex ones by the end of 2023.

All the above-mentioned challenges that the judiciary has been facing for years are still in force, as evidenced by the Semi-Annual Report on the Implementation of the Justice Sector Reform Strategy in Bosnia and Herzegovina and the Action Plan for 2019, and its conclusions. The umbrella institution of the BiH judiciary, the HJPC BiH, is still awaited to begin, continue or complete the many challenges and problems facing them.

There are still no key reform goals and measures. There is no Court of Appeals, nor a new Law on the Constitutional Court of BiH. Amendments to the HJPC Law are still pending. The establishment of commercial courts in the FBiH, which have been announced for years as a reform relief for municipal courts, has not yet taken place. It also has time to improve the financing of BiH judicial institutions, increase the efficiency of investigations in criminal proceedings, improve the system for monitoring the efficiency and quality of work of judges, prosecutors and professional associates, and dozens of other measures that are alarmingly warned by both international and domestic institutions.

The full report is available at this LINK.